Hey ladies! Yes, I've been reading the blog and yes I've made some things over the last month, but no I haven't posted on here. I've had a little problem... my camera disappeared. I last saw it on Christmas Eve. I was at my parents house over Christmas and thought maybe it was there, but mom can't find it. I called both grandmothers and they haven't seen it. I was hopeful it was at one of their houses seeing how I was at both of them the last day I remember not having it. *sigh* Well, I'll just share the pattern with you all.

I took my four year old to Wally World and let her pick out yarn. I tried to get her to go with some bright, multi colored yarn, but she chose one that went from lavender to white. What can I say the girl likes purple. Instead of doing the tassels with yarn, I did them with ribbon. My hubby gave me his camera last night when he realized mine is still gone. I'll add a picture of the hat later. You can check out the free pattern here.

A little boy in my daughter's preschool class has a new baby sister. I debated what to give the family and decided on hair bows. I know I could have sewn her something and really thought about embellishing a onesie. In the end I decided I already ribbon and clips on hand so I would go the cheaper route. I gave her five hair bows and two flowers. And yes, all seven were hand sewn. I had planned on showing them to you, but the blasted camera issue... 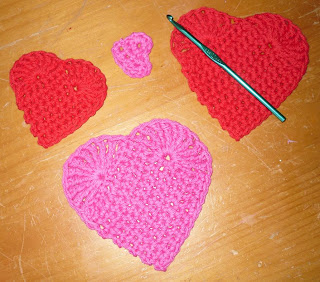 I've made four so far. Instead of sewing them together to make them bowl fillers I think I'll just lay them on the coffee table. I'm sure I'll spend the next three weeks telling Kaitlyn Joy, "put those back!" LOL... I left the crochet needle in the photo so you can see how big the biggest ones are.

And in case you all wondered if I did anything else productive with my day here's my other work of art... 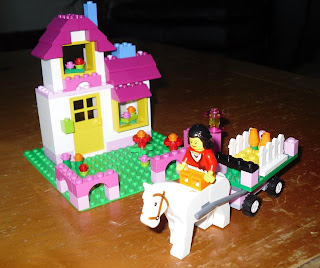 Yes, that's right a Lego house front and pony cart. By the way the orange things in the cart are upside down carrots. I didn't catch until after the photo was taken that Kaitlyn Joy flipped them. They are now on the bigger chimney. =)

Oh, boy! I hope your camera didn't get accidentally thrown out with the gift wraps and bows...

That hat pattern is so cute - I can totally imagine a little kid wearing it.

I've been making hearts and I can't stop. Now I started making heart ornament frames...I think you'll love making those hearts once you see how easy and quickly they are to crochet.

Thanks for sharing your projects :-)

That is a fun hat pattern. Great for kids with those tassels.

I think playing with Legos is very productive and relaxing too.

Oh, look how lovely your hearts turned out - wasn't that fun?

Jennifer ~
That hat pattern is so cute!! and your hearts did turn out very pretty♥ I envy you girls who can crochet and knit, but I love♥ seeing your pictures - keep them coming, please!!
And ... I do hope you find your camera, that had to make to sick :(
I love Leggos too :) Cute house!!
Hugz,
CJ♥♥ 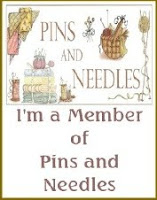 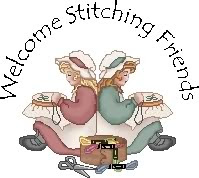